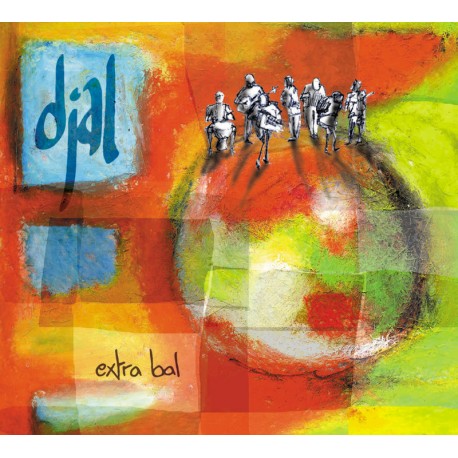 They're French, they're fresh, and they're fun. They're also fabulous musicians. Based in Grenoble, Djal combine influences from jazz and Arab music with traditional material from the Savoie region and beyond. Their instrumentation includes fiddle, flute, hurdy-gurdy, button box, bouzouki, recorder, bass, bombarde, dulcimer, guitar, and various drums. The overall sound is rich and varied, with plenty of punch and the added depth of a seven-piece band.
This is a live recording, made at a home gig with an atmosphere halfway between a barn dance and a rave. There's a primal energy on tracks like Hollwenn and the opening set of three bourés. Michel Bordeleau'S great Québecois Reel des 4 Fers en l'Air is given an inspired treatment, and it's followed by a trio of jigs with more than a touch of Irish about them. Gavottes, rondeaus and other Breton dances are mixed in among the standard French forms. With the exception of Michel' reel and a couple of polkas, all the tunes are by band members. Most of the tracks here are up-tempo dance music, but there are some gorgeous slow numbers. Ivoirine is a stately air, and the waltz Masque Rouge is one I intend to learn.
Improvisation is one of Djal's strengths. Several of its members have one foot in jazz, and their extended solos are a joy to hear. Yann Gourdon's demonic hurdy-gurdy is awesome on Hollwenn and elsewhere. Christophe Sacchettini's flutes are pure magic, and Daniel Gourdon's fiddle brings an eerie swirling quality to several tracks. The rhythm section is also worth a mention: imaginative, incisive and irresistibly intoxicating. All in all, this is an excellent CD and a wonderful example of the best French music.
Alex Monaghan