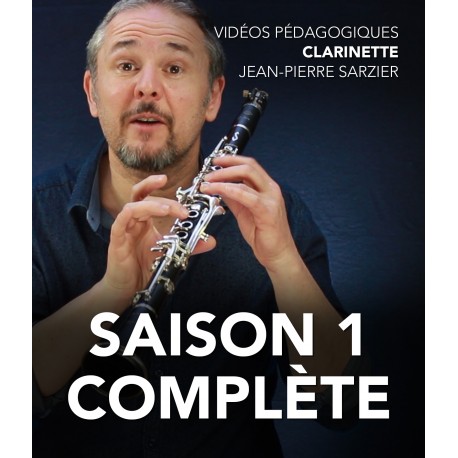 The first season provides a look at ten songs, almost all composed, among the current standards of traditional musics, ten pieces regularly played in jam sessions, French and European balls. The difficulty ranges from easy to intermediate (from the second year of the first course to the middle of the second course) The first season focuses mainly on the style and the ornamentations encountered in the songs.
Following an introduction dealing with a specific technique (breathing, airflow, single, double and triple tonguing, slap, 7/8 time signature...) each episode focuses on one or two musical pieces (each phrase is played slowly, then at moderate speed, then up-tempo). Ornaments are taught step by step throughout the season. There will be specific exercises for 7/8 time signature, and we'll learn an (easy) standard of Balkan music.

Each video offers a way to accompany the songs, with a bass clarinet or a soprano clarinet, based on the chords indicated on the music sheet.

You can download the music sheets of every songs (key of C and B flat), with or without ornaments, and an mp3 file of the song with accompaniment.