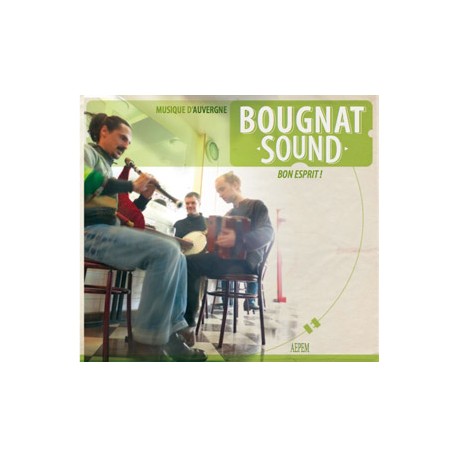 If someone had asked me how to improve on the classic bagpipe and accordion sound of the Auvergne, I would never have thought of saying "Add a banjo!" Yet that's exactly what Bougnat Sound have done. Olivier Sulpice wields an Irish-style short-necked tenor banjo, concentrating on the low octave, while Julien Barbances claims the musical high ground with squealing pipes, fiddle and voice. The low percussive notes of the banjo add something akin to the hurdy-gurdy, and combined with a staccato diatonic style from Loïc Etienne, you can almost hear the ghost of a vielle à roue on several tracks, turning this trio into a virtual quartet. There's also a hint of Arab music about one or two of Bougnat Sound's selections, as Julien's pipes imitate a shawm on Scottish à Gatineau while Olivier's banjo reverberates round the kasbah for Amusons-Nous Fillettes.
Aside from these idiosyncracies, Bon Esprit! is pretty much standard Auvergnat music: Bourrée de Saint-Amour, Bonjour Belle Bergère, Lo Rossignol, Pierre Labora, and the ever-popular bourrée Le Deuxième Thème. Barbances has a showman's flourish on the pipes, storming into Méfiez-Vous and Cinq Noisettes, finishing strongly on Rossignolet Sauvage and Polka du Chêne Saint-Louis. Sulpice keeps up well, and when Etienne comes to the fore he plays with considerable grace, but the box and banjo are often eclipsed by the shrill wild notes of the cabrette. This is as it should be, from a piper's perspective, which is sometimes all that matters!
© Alex Monaghan