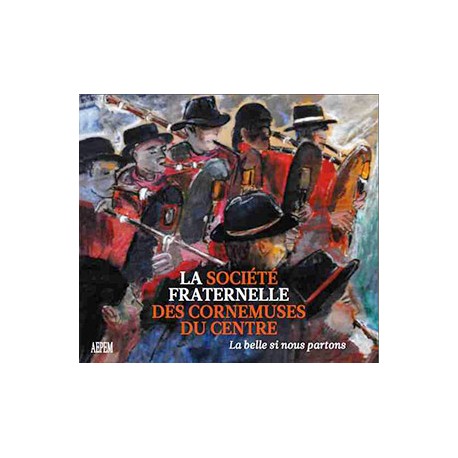 A pipe band from central France ? First time I've heard of such a thing, but this CD is the proof. Forget La Chavannée, forget the massed concerts at St Chartiers: this group is an actual organised band, with over forty pipers playing parts and harmonies, plus drummers and other accompaniment. The big difference between "La Frat", as they are known, and bands from Scotland or Brittany or even Galicia, is the number of different types of bagpipe in this Central French line-up, Everything from the Auvergne cabrette to the big Bourbon pipes comes into play, giving a range of pitches and dynamics. [...]
So what do they play? A bit of everything: marches, bourrées, mazurkas, a set of Flemish polkas, more bourrées, an air or two, scottishes, and waltzes of course. A lot of this material comes from the Berry region, my old stamping-ground round Vierzon, Bourges and Châteauroux. There are also tunes from the Limousin, Nivernais, Bourbonnais, Auvergne and Morvan regions. Every track is carefully arranged, with some very striking effects and imaginative variations, similar to the Breton bagad tradition. Everything on La Belle si nous Partons is also extremely well rehearsed, not like French pipers at all! Even with such a large number of players, the sound is crisp and clear, and the recording quality is excellent. AEPEM has brought out some unusual CDs this year, but this is probably the most surprising, and the most dramatic. Play it loud!
© Alex Monaghan