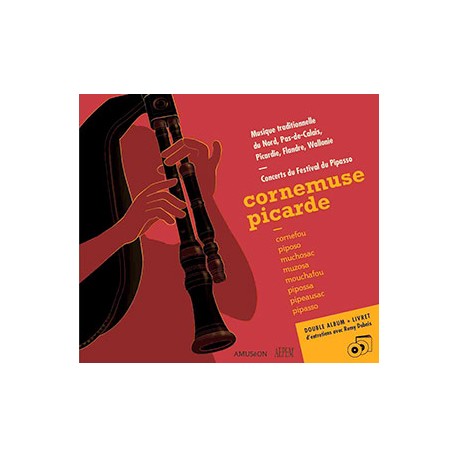 The bagpipes of Picardy, in northern France, are relatively unknown. Some instruments have survived in museums, but it's only quite recently that faithful copies have been made. Old recordings are also very rare, although a few do still exist. This double CD presents a concert by some of the leading makers and players of the very recent revival, and features a great deal of spoken commentary and explanation in French. There's also a 150-page book, in French with lots of photos: in continental style the table of contents is at the back. I haven't read the whole book, but it covers the history, style and manufacture of these mouth-blown pipes which have now been reproduced in various pitches.
The sound of the Picardy pipes is sweet and pleasant, similar to Flemish or central French pipes, generally spanning an octave or so. There are quite a lot of gracenotes in the playing here, but the ornamentation is kept fairly simple compared with Scottish and Irish styles. The regional repertoire is fascinating: a mixture of tunes I haven't heard before, some melodies which are widely played in France or Belgium, and also local versions which have been adapted or edited over the years. With more than sixty melodies on the two discs, there's plenty of material to get your hands around. Airs and marches, bourrées and estampies aboun[...].
The first disc was recorded at a regional festival, live concert performances by seven different solo players, with one duet track [...] What we hear is the pipe chanter, very nicely played for both simple and complex melodies. The second disc is an interview with a player, maker and collector who talks and plays in equal measure. Intriguing music, and fascinating stories too!
© Alex Monaghan