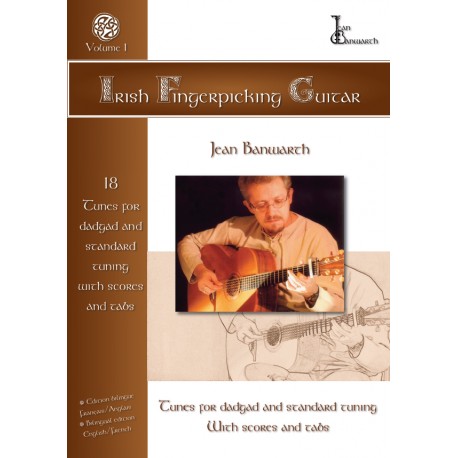 Every tune is given in both classical writing & tabs, fingerings are indicated if necessary and there are the lyrics as well
- 7 tunes in standard tuning
- 14 tunes in DADGAD
Difficulty level : from « intermediate + » to « master »

This product is no longer in stock

Jean Banwarth is based in Grenoble in France and has been playing guitar for the past 30 years. Like many he began with standard tuning and discovered DADGAD late in his learning curve by which time he had to relearn the guitar all over again. His website explains this journey in some detail, it also has a number of videos of his excellent playing. The CD is best experienced on a computer where you can watch even more clips of his finger-style and break down just exactly what he is doing. The slim book is very well produced with the text in English and French. The tunes are typeset in a clear if somewhat small font. This is because he offers both the regular staff notation and a running TAB line underneath, which means some tunes, Rodney’s Glory for example run to two pages. Many of the tunes are session standards (The Blackbird, Cregg’s Pipes, Out On The Ocean) no bad thing when it comes to a tutorial package, you’d want to be learning material you can use down the pub on a Thursday night. Not all the pieces are Irish, there’s a lovely French Mazurka and even a Klezmer tune (which explains where Lúnasa got their melody Frailoch from). Each tune has a short paragraph explaining particular techniques and pointing to landmark recordings, Jean also is generous in his praise for other guitarists, with a deep admiration for the playing of Tony McManus. The book, the CD and the website are highly recommended to guitarists who are looking to develop a solo finger-picking style, whether it be in standard or DADGAD, and he makes the argument against too much DADGAD very persuasively indeed. If you can master this book you will have gained some powerful tools in your musical armoury. Do visit his website, he is besotted by his instrument and Irish music. An hour in his musical company will not be one minute wasted, as he’s already travelled the route you are now taking, he’s a good guide, like they used to say of the Golden pages, let your fingers do the walking.
Seán Laffey - Irish Music

Guitarist Jean Banwarth is the co-founder of French bands such as Djal and Dedale. Banwarth is following close on the heels of the McManus and Sibéril DVDs with a fingerpicking guitar tutorial for Celtic music. The 18 tunes - with staff notes and tabs - kick off with a mazurka, which is introducing the DADGAD tuning and should be no problem for fingerpickers, even for the uninitiated. Then it's standard tuning with "The Blackbird", originally a hornpipe (listen e.g. to the Red Wellies, here rewritten as a 6/8 air. Next is in both DADGAD and standard tuning (even better dropped D) the strathspey/highland "Bó Mhín na Toitean", inspired by Altan. There's the reel "Cregg's Pipes" with plenty ornaments inspired by Lunasa, both "Eddie Kelly's Reel" and the "Rights Of Man" hornpipe are considerably slowed down, along the way incorporating hammering, pulling, slides. "Speed the Plough" features a thumb triplet in Tony McManus style (upward strike). With a Carolan tune, an American song, a gavotte and a klezmer piece taken from the first Lunasa album (I myself recorded "Itzkel Frejlech" though I played only rhythm guitar then), it is a very comprehensive and eclectic method - and thankfully bilingual French and English.
Folk World