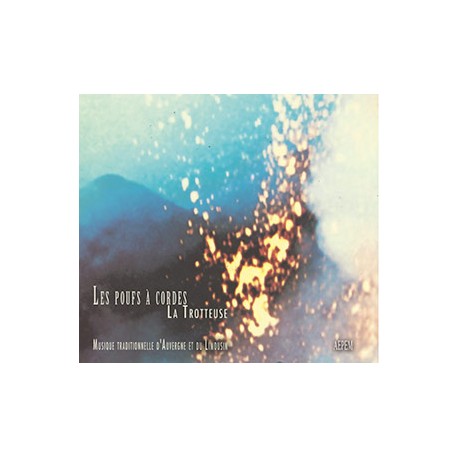 Violin and cello is not a common combination in the traditional music of the Auvergne and Limousin regions, but these two French musicians manage to sound like the more familiar bagpipes and hurdy-gurdy, as well as bringing their own unique character to these old tunes. Violin duets, violin and cello, and foot percussion make a surprisingly full sound. Two guests add variety on a few tracks, with accordion, harmonica and vocals, but most of La Trotteuse is down to Clémence Cognet and Noëllie Nioulou. Ms Nioulou also provides one of her own compositions here, a powerful twisting bourrée in triple time.
Bourrées, polkas, mazurkas, marches and waltzes: these are the typical dance forms of central France. Cognet and Nioulou power through them in an energetic earthy style, with Nioulou's cello doing as much work as Cognet's fiddle, and both instruments grinding out the low notes for a wonderfully visceral sound. Valse à Charrier and the mazurka Mariton are among my favourites on this CD, driving rhythms and great melodies with a dark core which is more like the music of Scandinavia than France[...].
Les Poufs à Cordes have drawn on old discs and unpublished recordings, finding tunes from old musicians, and one or two more modern pieces. The suite of sautières is a definite highlight, quite unlike the other tracks, reminiscent of an Irish polka. I Eron al Liech brings vocals which are almost Gregorian, a piece with a medieval feel, and one of several with titles in old dialect. The title track is much more modern in tone, a waltz approaching Parisian café music, especially when the accordion comes in. There's no shortage of variety on La Trotteuse, with even a Bach minuet to show off the virtuosity of this duo. The final track returns to the familiar bourrées, but still only hints at melodies I know. Cognet and Nioulou have unearthed a great hoard of tunes, and play them beautifully on this album.
© Alex Monaghan