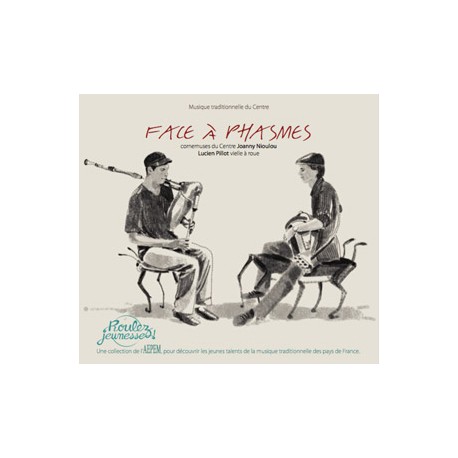 Short and sweet - not words which are often applied to French bagpipe and hurdy-gurdy music, but in this case I feel they are more than justified. I could have listened to another ten tracks from Nioulou and Pillot without any discomfort: their music is tight, tuneful, toe-tapping stuff, beautifully played, and cut from the fillet of the Central French tradition. Joanny (a chap, by the way) plays French pipes with a meaty low drone, in keys around G. The chanter sound is rounded and firm, with enough power to drive a dance. Most of the melodies on Face à Phasmes are dance music, simple but engaging, and the pipes tackle them effortlessly.
Lucien Pillot provides the engine room, gurdy drones cutting through the mellower pipe bass, while his wheel catches the rhythm. Two- three- and four-stroke techique is flawlessly executed, the mark of a hurdy-gurdy master, maintaining a solid beat throughout. Pillot occasionally leads the melody, demonstrating great left-hand dexterity, but his instrument is much more suited to accompaniment: the drone strings far outdo the treble strings. There are more flamboyant gurdy players, but I can't think of a more pleasant one: not a broken rhythm or a bum note to be heard, and his wrist-work is surprisingly imaginative.
Together, pipes and hurdy-gurdy provide that elusive wall of sound, deep and full, which characterises French music at its best. Polkas, bourrées, schottisches and waltzes are all delightful.
© Alex Monaghan